When people ask about the game I’m working on, I find it difficult to explain since much of it is still in flux at this early stage of development. Rather than attempt to verbalize the nebulous blob of ideas I’m sorting out in my head, instead I thought I’d write a bit about the original inspiration for the ideas behind this game. 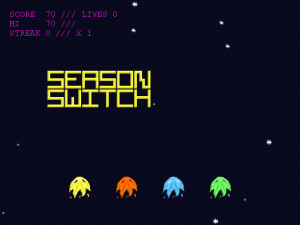 Back in early 2009, I was living in North Hollywood and spending the majority of my time playing DotA and working on a few game prototypes. One of these projects was a very simple game I made for the Wolverine Soft 48-Hour Alumni Development Contest. Each year, the game development club at the University of Michigan holds a weekend long contest to see who can develop the best game in this short timeframe. This sort of event is more commonly known as a game jam. I really enjoyed these events when I was a student, so I jumped at the chance to do it again when the contest was opened to WSoft alumni.

The theme of the contest was “switch”, which made me think of Ikaruga. In this bullet-hell shmup game, players can switch polarity to absorb enemy bullets of matching polarity. I decided for my “switch” game I wanted to focus entirely on an absorb mechanic rather than shooting, and just to make it more interesting, instead of switching polarity of a single ship, players could switch between controlling 4 differently colored ships. The title Season Switch was largely arbitrary, coming from the fact that the 4 “ships” represented the spirits of each of the 4 seasons. I developed it using XNA, so if you have access to a Windows PC, feel free to download the game here and give it a try (I apologize in advance for the Microsoftness). You can read about how to play here.

Here are a couple screenshots which give you a good idea of what the game is like. 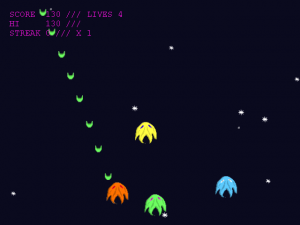 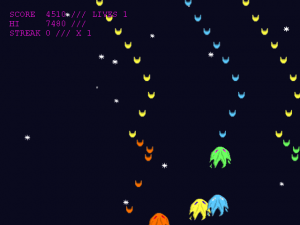 To be blunt, Season Switch is a bad game. The difficulty curve is ridiculous and players usually lose all of their lives almost instantly once multiple streams of bullets are on screen. But I really like the absorb mechanic as the central focus of a bullet hell game, and thus, Heartonomy’s first game will pick up on this concept where Season Switch left off.